Don's first car was a Lotus Esprit. You'll never guess what his second car was!

1:30​ Don's first car was a Lotus Esprit. You'll never guess what his second car was! 3:49​ regarding Colin Chapman and Lotus "adding lightness" and his many patents. 3:50​ regarding DeLorean and Lotus. 8:22​ Lotus Esprit vs Ferrari Testarossa, the Esprit was close to half a second quicker to 60 miles an hour, despite having eight fewer cylinders. 9:33​ regarding Turbos 12:08​ Don bought his first Porsche 911 -air cooled. (...then 'vette, Mini Cooper S...) 13:29​ Don's perilous journey home from the dealership in a Porsche on the wrong tires in white out snow conditions (all night, through mountains!) One of them was in North Carolina. In my Lotus, my first Lotus that I bought, and I was with my girlfriend, and we were going to a winery to do a wine tour and a wine tasting. And I thought what a beautiful day. Not a cloud in the sky. Sunny, great temperature. Is this. We've done? Is this upstate New York. No, this was North Carolina, in North Carolina. Okay. 19:32​ Don spins out on the way to a winery in a Lotus....eventually facing traffic! On a date (with who is now-his wife!) 26:26​ No brakes in a 944 Turbo S at 150 MPH! 30:00​ Regarding riding with Derek Bell in a Le Mans racecar. 33:19​ Derek looked over at me and said, How much do you weigh?

Jeff Sterns connected through cars and I hope you enjoy Part Two Don Hudson, coming up right now, and Don did hear something that nobody wants to hear when they're going 150 miles an hour on a freeway, you'll have to watch to find out. first car I bought with my own money, like my first purchase was a Lotus Esprit turbo. Really? Yes. You want to ask me what my second car was when the Spree was sort of selling at the same time as say a Ferrari Testarossa, which was a 12 cylinder car. The four cylinder spree was actually close to half a second quicker to 60 miles an hour, despite having eight fewer cylinders, 930 Porsche, some of the Saab turbos and certainly the Lotus Esprit turbo and the car begins to rotate. And if you know anything about mid engine cars, they kind of spin on their own axis, right because the weights in the middle. So this car does 180 degrees spin. the sake of argument, let's say we were above 150

Jeff Sterns connected through Guys, if they're big wigs, we'll have him on the show. And yes, we'll talk about cars and everything else. Here he is now, Jeff Sterns.

So you asked me what my first car was? The first car you had first car you bought? Well, the first car I bought with my own money, like my first purchase was a Lotus Esprit turbo. Really? Yes. That you might be the only person ever to say that first car that I bought Lotus Esprit it well, it was Pre Owned. And I was. I was in my late 20s when I bought my first car because as I mentioned, right out of school, I was always with a dealership. And not so much today. But back then, salespeople and dealerships and managers all had demonstrators

to drive. Right? That's right. So

This has been Jeff Sterns connected through cars. 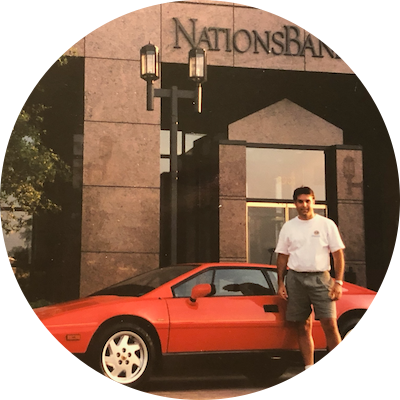 A lifelong car and motorsport enthusiast, Don Heditsian started selling luxury cars while attending college. Since then he's held corporate sales and marketing roles with automotive brands ranging from Volkswagen to Ferrari. Join us for an entertaining discussion as he recounts some his most memorable experiences while working in the Auto Industry.