ROAD&TRACK former EDITOR IN CHIEF JOHN DINKEL explains why he chose these 2 innovations!!!

Unknown Speaker  0:00
I like to ask people the question, what are the biggest innovations in automobile engineering over the last 50 or 100 years, and you get all sorts of things. And now, so I asked, what do you what what are the two biggest advances that we've seen?

Unknown Speaker  0:33
And I would tell you, you're close. But but but they ain't no cigars for you today.

Jeff Sterns  0:40
I knew I would look, I knew I was in danger with you

Unknown Speaker  0:45
know, I actually, this brakes were a significant improvement over over what we had in braking. But I would tell you that even more important than what the brakes did his tires, if you imagine the tires that we run on today, 20 or 30 years ago, they would have been racing tires. Right. And when I when I got into the business, American tire manufacturer doing nothing but but bias ply tires, you had to go to Europe, to find radial tires. Now, that said, the bias ply tires that were on American cars. If you are an enthusiast, they were terrible. They really were terrible. They were balloon tires, made the back in those days, we had an 8080 profile tire, which meant that the distance between where the rim was and how much rubber went from there down to the road was big. So you had you had a large envelope in which you put air air can be compressed. But you can only put certain psi into the tires. So the bias ply tires, which is soft and squishy, and didn't grip very well. And really, for American drivers driving on American roads, the emphasis really was on going straight ahead down a highway, and was the smoothest possible ride you could have. So handling really wasn't a part of the equation back and back then. So not many really many people can't except for you and I who who are enthusiasts, and didn't like the fact that these cars didn't turn it and stop that and go really big. And the tires were a big part of that equation I did was run Wakefield, the very first tire test that any buddy in America ever did. And we did it with Roadtrek back in 1972. And we we borrowed a 240 z from from Datsun. And we arranged to get about maybe 15 different sets of tires, radio, radio ties is what we will after that was what we went for. And that those tires became the very first tire test ever done by an American magazine.

Jeff Sterns  3:14
Now what was your role with Road and Track at this time,

Unknown Speaker  3:17
I joined and road tracking in 1972. And I was the engineering editor, Jim Crow, who was the editor at the time, was in love with Baja. And he and he loved taking his Jeep Cherokee Grand Cherokee down to Baja and spend time down there. And from that, traveling to Baja, which he did, he came up with the concept for what became the very first magazine dealing with pickup trucks, it was called PV for pickup and for Drive. And it was the very first magazine of that type. And when when Jim convinced the bonds that they needed to do a magazine in that field because of what was happening in that field at the time. He went off to do that. So when he went off, and he did it at a building a couple blocks away from headquarters, Ron Wakefield, who was the engineering editor at the time, moved up to become editor. And he came looking for me and he found me and I became the engineering editor. So we collectively thought up the issue of we need to do tire testing here because it's something that our readers need to need to know about. And so, we had Perrelli and Michelin and and we had some early types of other bias belted tires, etc, that we tested as well. But the reality was, is that the European tires ran and ran away with with the results Whether it was straight line traction, whether it was traction in the wet, whether it was cornering, braking, you name it, the radial tire was just that much more superior superior tire. Anything we had. The problem in America at that time is it's, there were two different types of molds, you had a clam shaped mold. So So think about two halves of the shell, were clamshell going going together. And that was the technology that was used for making a bias ply tire, a European tire required segmented molds, so they had to have pieces that came came that sort of lay down all around the tire. And you couldn't build radial tire on a on a on what would be a clamshell mold. So it would have meant huge investments, by the tire companies to go to radios mean, ultimately they did. But what we saw happening was sort of a bias belted tire, they could use the clamshell mold, and they could still put belts to help stabilize the tire. Somewhat like a radio button, but not anywhere is good by using these belts. And you could use the same clamshell molds. So that was the first evolution from from the Detroit industry, from bias ply ties to the belt bias filter ties. I can tell you, I got some of the earliest buy bias belted tires that Christ was getting from Goodyear to put on a barracuda that I had, I had I had a I had a 66 Barracuda formula S much better tire than what they had. But the problem was that with within about two weeks, every one of those tires had bulges in the sidewalls. And they had to be replaced. So that technology wasn't made. It's like any other new technology. It took a lot more development than the public thought. And maybe some of us were driving harder than they expected people to drive. So what about innovation number two in automotive, so small that you could overlook it very easily. But it's the thing you find in every any device like this these days. It's the microchip, when when you and I were growing up in the heyday of muscle cars, I mean, there's there's never been anything before or after that that's had the performance and and the capabilities of cars that came from the from the middle 60s into the very early 70s. Right? Well, what what do I just say? Did I say that? You can't buy a Corvette today that 700 horsepower, has 25 miles per gallon is 60 miles an hour on the freeway? And is it as clean as a whistle? Oh, well, I

Jeff Sterns  7:54
mean, really, if you think about zero to 60 times, many many many cars can blow away the muscle cars are those air I mean in God forbid the electrics

Unknown Speaker  8:03
well they bomb away in every single way you can think of Well, it's great every year I say stop and turn to Yeah, top end, quarter mile. This there's nothing like the foremost and it's all because of the microchip. The microchip gave us back, gave us back horsepower. It gave us gave us fuel economy like you can't believe and it gave us engine so clean that you can't measure the emissions. Literally a Chevy Corvette with 650 horsepower that you can buy for for 60 grand, the best performance value on the planet or off the planet these days. From the performance perspective. Literally when you're driving down the freeway 60 miles an hour. It means like you're not up here at an idle speed is like 1000 to 1200 RPM, it's all it is. And it's giving you 25 to 30 miles per gallon. And I mean it's clean, not giving any emissions and it's all because of what we've been able to do with that microchip. 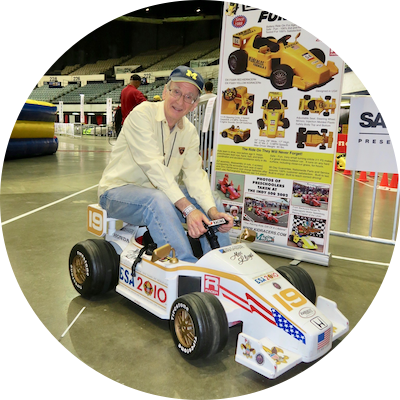 R&T Illustrated AutoDictionary and others on Mazda

John Dinkel earned BS and MS degrees in mechanical engineering from the University of Michigan and is an automotive industry expert with over 40 years experience. His areas of expertise include engineering, journalism, testing and analysis, product development, product planning, advertising, marketing, website development and content, internet automotive retailing and public relations.  Most recently he has been a consultant to privately-held companies specializing in the commercialization of alternative automotive powertrain vehicles/technologies, the importation of Chinese vehicles into North America, an automotive crowdfunding site called FundingGarage and an automotive retail website.

Dinkel was a competitive race driver for the Bakeracing Corvette team (two SCCA Championships), worked directly with Goodyear in the development of the Gatorback tire for showroom stock racing and developed the first computerized road testing equipment in the automotive industry. Dinkel was Editor of Road & Track, one of the most popular consumer automobile magazines in America, developed some of the earliest Internet-based automotive material and helped create an automotive website. Dinkel is author of the Road & Track Illustrated Automotive Dictionary and has written three books on Mazda and a comprehensive history of Toyota. He is a member of SAE, SCCA, Road Racing Drivers Club and the Motor Press Guild, serving as this organization’s president in 1991. Dinkel is also a regular contributor to the SAE’s Automotive Engineering magazine and a variety of automotive magazines and websites, including, www.SAE.org and http://wheelstv.tv.